Archbishop Gregory stood up to Trump. Now he's about to be the first Black cardinal in U.S.

Few of his parishioners were surprised when Washington, D.C., Archbishop Wilton Gregory took on President Trump.

Gregory isn’t known to speak out often about issues specifically facing Black Americans. But when he does, it is unambiguous and forceful — in words unusually strong for a man of the cloth.

In June, racial justice demonstrators outside the White House had just been tear-gassed so Trump could stand for a photo-op in front of the iconic St. John’s Episcopal Church, awkwardly waving a Bible. In a statement the next day, Gregory condemned the president’s actions as an attempt “to silence, scatter or intimidate” crowds “for a photo opportunity in front of a church.”

Then he took aim at the largest lay Catholic organization in the U.S., the Knights of Columbus, which hosted Trump the following day at the St. John Paul II Shrine in northern Washington. 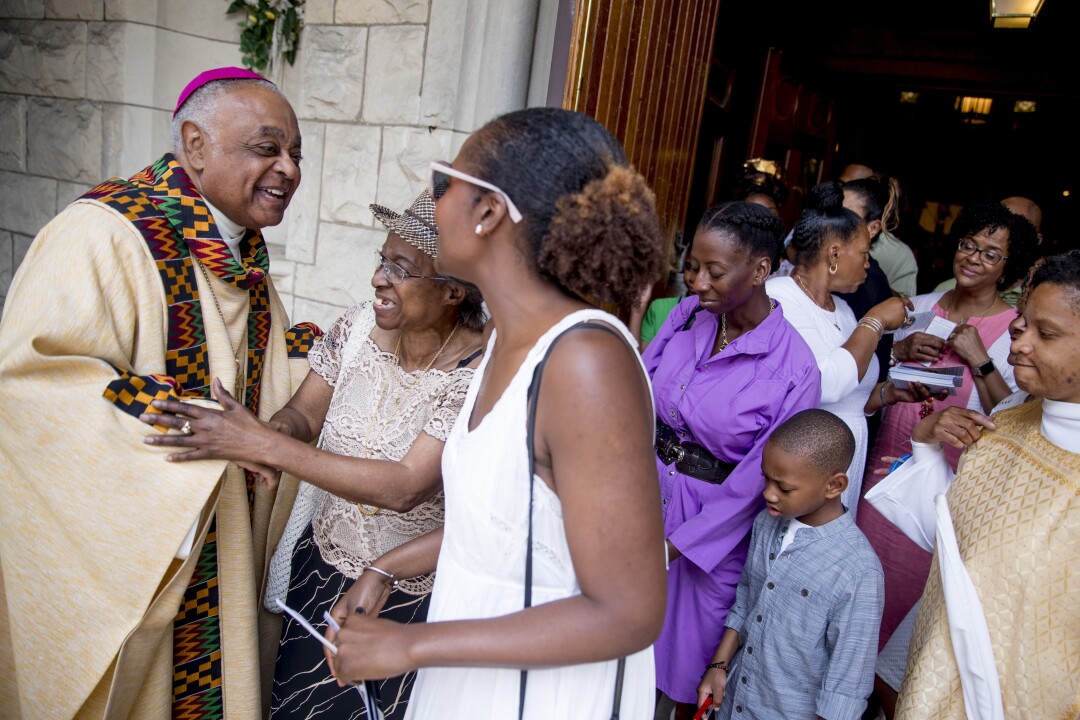 “I find it baffling and reprehensible that any Catholic facility would allow itself to be so egregiously misused and manipulated in a fashion that violates our religious principles,” he said.

On Saturday, Pope Francis will elevate Gregory to cardinal, the first Black American to reach that position, the highest rank in the Roman Catholic Church and part of an elite that chooses popes and is the final word on doctrine.

In selecting Gregory, 72, Francis is rewarding a man who over the decades took courageous stands to end sexual abuse by clergy. They were positions that at times seemed to sideline his career, but that put him, his supporters say, on the right side of history and on a firm moral footing. 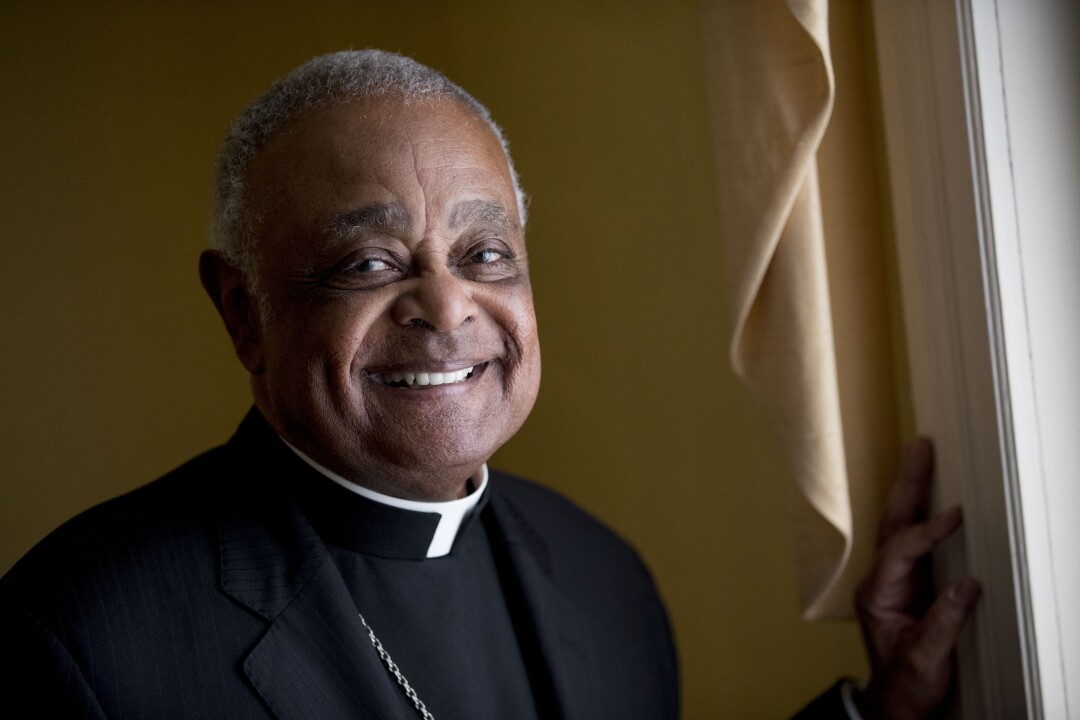 Over the years, Archbishop of Washington Wilton Gregory, 72, has spoken out against clergy sexual abuse and in June condemned the tear-gassing of antiracism protesters to clear the way for President Trump’s photo-op outside an iconic church.

Like most Black people in the United States, Gregory was not born into the Catholic faith, growing up in a Protestant denomination. It was largely with the great migration of Black Americans from the South to the North in the first half of the 20th century that many turned to Catholicism, drawn partly by its educational opportunities and social work in urban areas.

As a child on the South Side of Chicago, the young Gregory so admired the nuns who taught him in the grade at his Catholic school that he decided he wanted to become a priest. He informed the school’s head father of this ambition, according to a story Gregory often relates. He was told: Well, maybe you should become a Catholic first.

And so he did, taking his first communion while in elementary school. 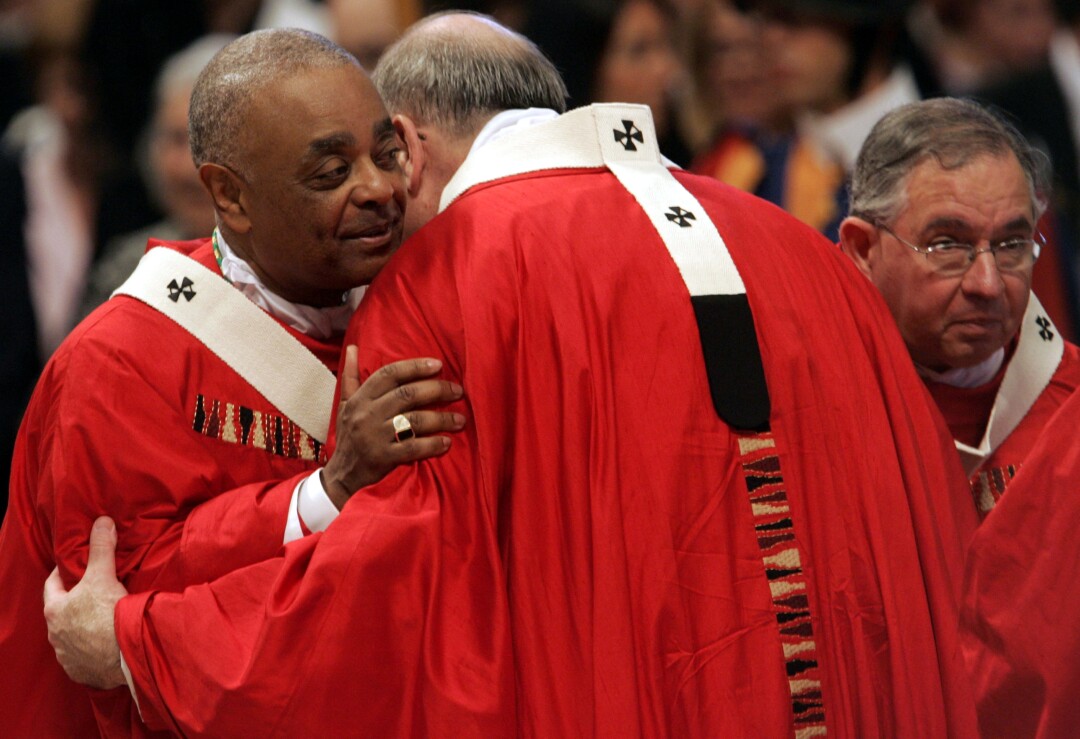 He was ordained a priest in 1973 in Chicago, a bishop a decade later, and legendary Cardinal Joseph Bernardin took him under his wing. Rather than send Gregory to head up a Black parish, or to take an auxiliary position in a large, prominent diocese, Bernardin dispatched him to a small and very troubled predominantly white parish in rural Illinois.

It was there in Belleville, Ill., that Gregory got the on-the-job training that would inform the rest of his ministry. The parish was plagued with numerous cases of priests who had allegedly sexually abused minors but gone unpunished. In Gregory’s first year there, 1994, nine priests were removed from duty, nearly 10% of the roster of active clerics in the city.

Years later, when he was chosen to be president of the U.S. Catholic Bishops Conference from 2001-2004, he carried forth the same campaign to crack down on clerical sexual abuse, a widening scandal worldwide. He spoke of “zero tolerance” long before the Vatican adopted that policy. The Holy See continued for the most part to prefer to deal with abusive clergy privately, often transferring them rather than allowing them to be arrested.

Gregory was undaunted, his friends and colleagues say. He pushed all the way to the Vatican the Dallas Charter, a 2002 document that made it easier to remove sexual abusers. Praised in some circles as a trailblazer, Gregory’s actions also stirred up antagonism against him among the church’s more conservative factions.

Some in the church leadership say that the more conservative U.S. prelates chose to punish him, sending him to Atlanta as archbishop in 2005. While Atlanta was a perfectly fine, fast-growing parish, it was not considered a natural stepping stone to being promoted to cardinal or winning other accolades.

Msgr. Edward Branch, now retired, has known Gregory for decades and worked with him in Atlanta, where Branch credits him with bringing organizational efficiency to the sprawling, million-member parish. He established “priest Tuesdays,” when any priest could drive into the archdiocese office, knock on the chancery door and have a private exchange with Gregory.

“He drips with confidence. He does not suffer fools gladly,” Branch, 75, said. “He is not mean. but he knows what he wants and you know who is in charge.” 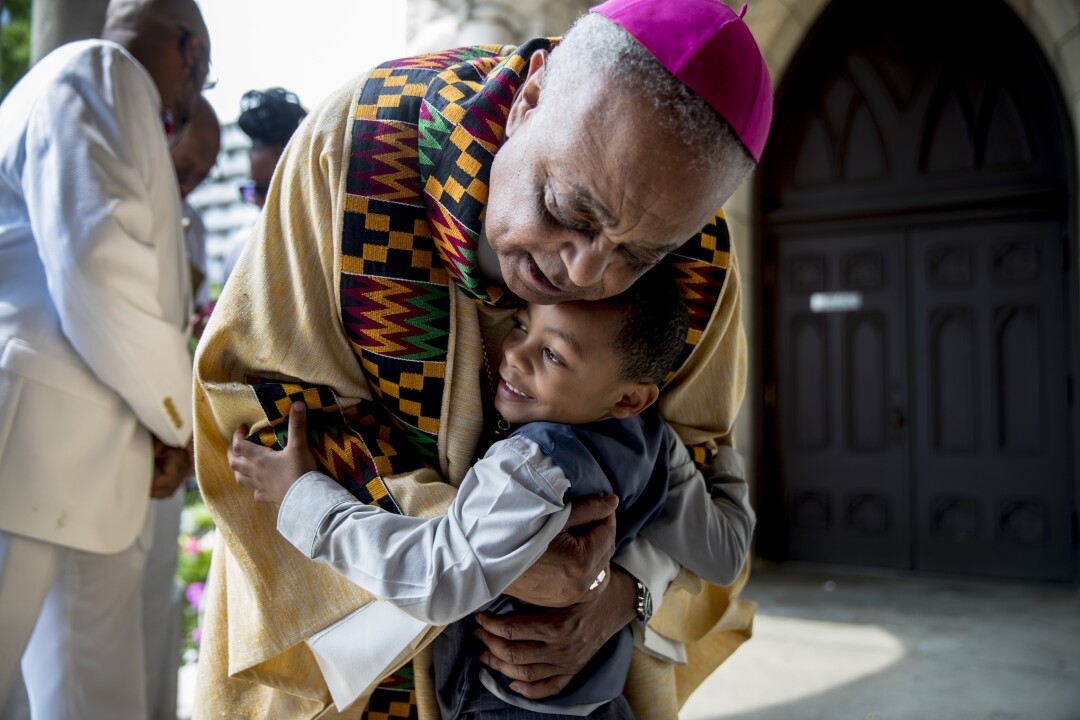 Archbishop of Washington Wilton Gregory, left, hugs Noah Tanner at St. Augustine Catholic Church in Washington in 2019. Gregory “drips with confidence,” retired Msgr. Edward Branch says. “He ... knows what he wants and you know who is in charge.”

Finally it was Pope Francis, who leads a more progressive wing of the church, who tapped Gregory as archbishop of Washington last year. Because of the ranking of the D.C. diocese, any archbishop is almost guaranteed to be elevated to cardinal. For Gregory, that opportunity came when Cardinal Donald Wuerl resigned in May 2019, after being named in a Pennsylvania grand jury report for bungling cases of abusive priests.

Though expected, Gregory’s elevation represents a milestone for Black Catholics, who still represent a minority in the faith — about 3 million out of 70 million Catholic adults in the U.S.

“This was Francis’ way of saying this guy got on the right side of history,” said Jesuit Father Thomas Reese, a prominent commentator on the church and Vatican. Gregory “has the courage to take the tough decisions and not be afraid to lead.”

And though the timing of Gregory’s appointment was not tied to the protests against racial hatred and violence targeting Black people that swept the U.S. this summer, the moment could not have been more appropriate, activists say.

“He has this love for the faith and also for his African heritage,” said Sister Barbara Spears, past president of the traditionally Black St. Francis Academy Catholic high school in Baltimore. “He is able to blend the two [seamlessly]. Not everyone has that gift.”

Spears, 79, meets with Gregory periodically when a contingent of Black nuns, priests and deacons gets together as the Black Catholic caucus to discuss the trials and tribulations facing their congregations.

“He has love and respect for family, and when we African Americans talk about family, it’s not just the blood family,” Spears said. “It’s about widening his tent. We are small but powerful. We hold onto God and each other.”

Gregory rarely wades into politics, but his criticisms of Trump have been pointed — and welcomed by Black Catholics and many others.

After his installation as archbishop last year, now perched in the heart of the nation’s capital with its large Black population, Gregory decried in his first statement after the ceremony that Trump’s divisive rhetoric had “deepened divisions and diminished our national life.”

His willingness to speak out only grew as Black men and women were being shot by police in questionable circumstances, including the death of George Floyd as a police officer kneeled on his neck in Minneapolis on May 25.

As his voice grew, so did the backlash. Some conservative Catholics, a group successfully courted by Trump, said it was unseemly for a priest to meddle in politics.

But Gregory compared his actions to clergy who marched in the civil rights movement in the 1950s and ’60s.

“If we don’t work together, I believe we will miss perhaps the most significant moment for real national transition I’ve experienced,” he said in a virtual panel discussion in June.

The recent comments are as “emotive” as Gregory gets, said Msgr. Kevin Irwin, a professor at Catholic University of America, who has known the cardinal-designate since the two were studying liturgy as graduate students at the Pontifical University of Sant’Anselmo on the Aventine Hill of Rome in the 1970s.

Though Gregory is generally measured in public, “when it is the time to act or do, he will strike,” Irwin said. “And there is no question he is in the right.”

Others disagreed. Brian Burch, president of a pro-Trump organization called CatholicVote, shot back that it was “regrettable” that Gregory chooses “to engage in a partisan attack on the president, especially when the country is in desperate need of healing and unity.”

The White House also slammed Gregory for criticizing Trump’s photo op, saying that it was shameful for the archbishop to “question the president’s own deeply-held faith.”

As the ceremony approaches in which he will receive the distinctive blood-red cardinal’s cap, Gregory’s supporters are rallying to defend him.

“He is not radical — he is principled,” said Father John Cusick of Chicago, who has known Gregory since they were in seminary together at St. Mary of the Lake, near Chicago, in the early 1970s.

Often it’s the church itself that is part of the problem, with its own history of racism and sexism, Sister Spears said.

Gregory “may not be able to change that,” she added, “but he is a beacon of hope to call on the church to face racism, to acknowledge it,” Spears said. “It’s a journey, sometimes along a well-paved road and sometimes along a bumpy road.” 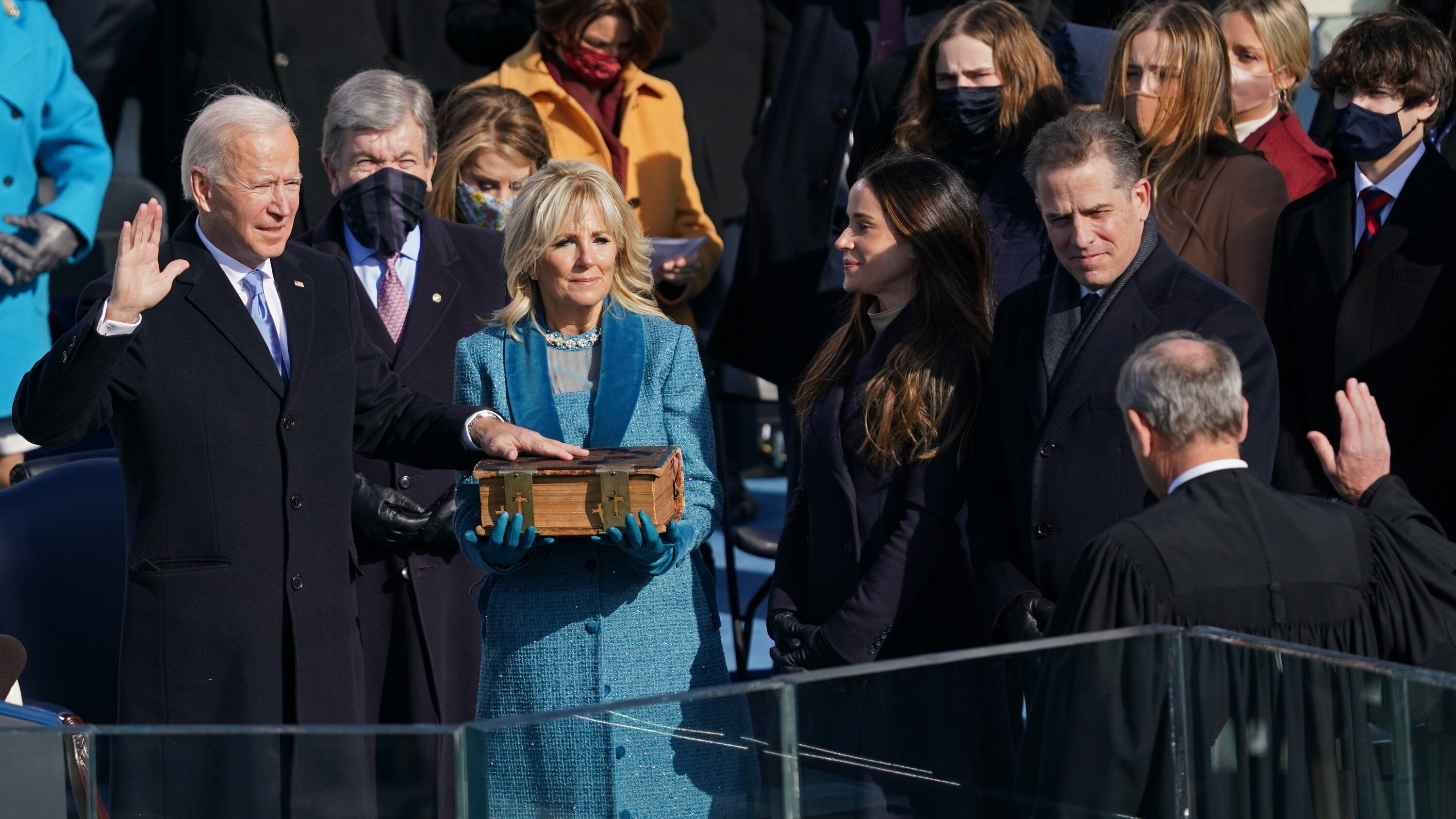 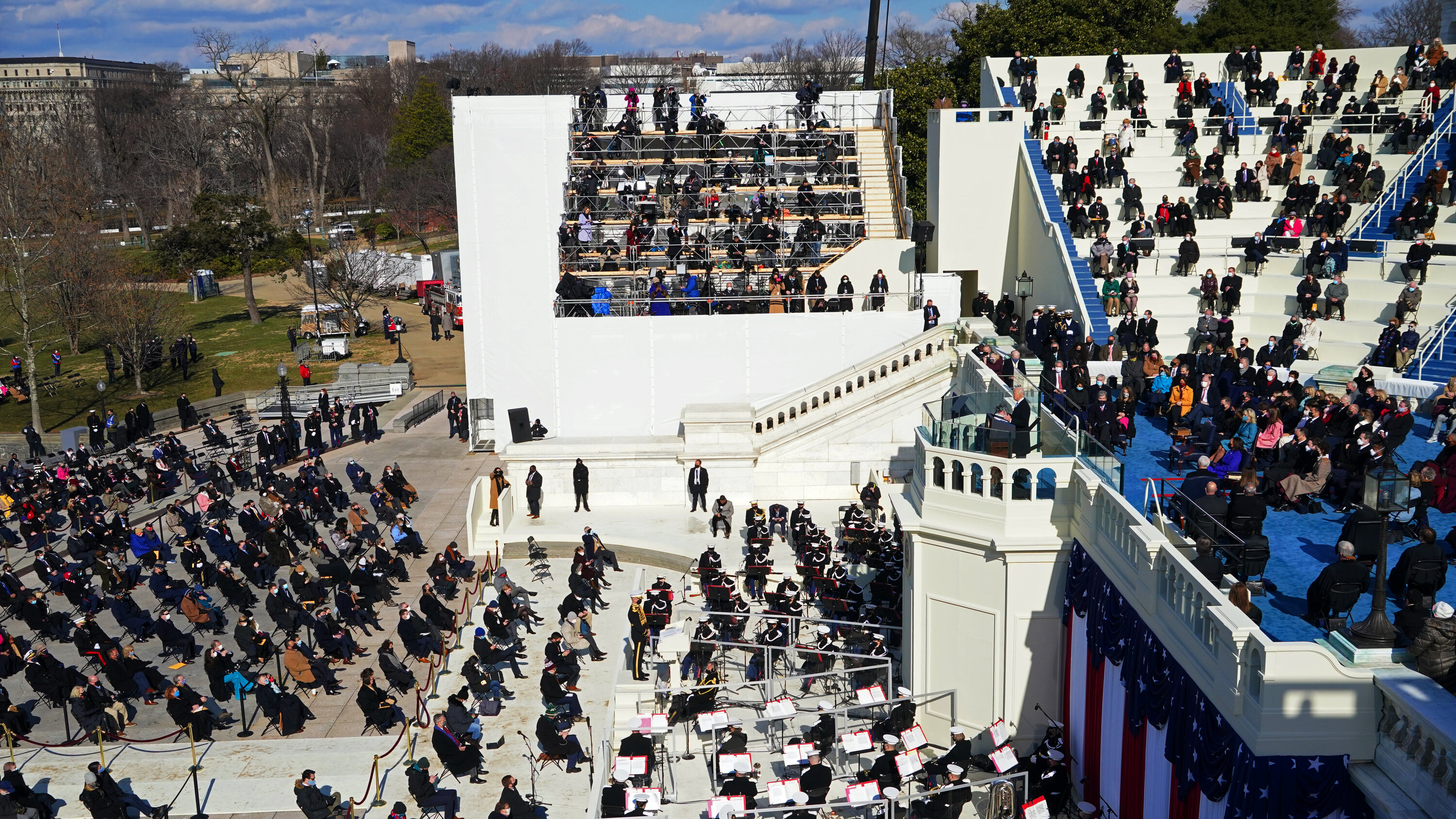 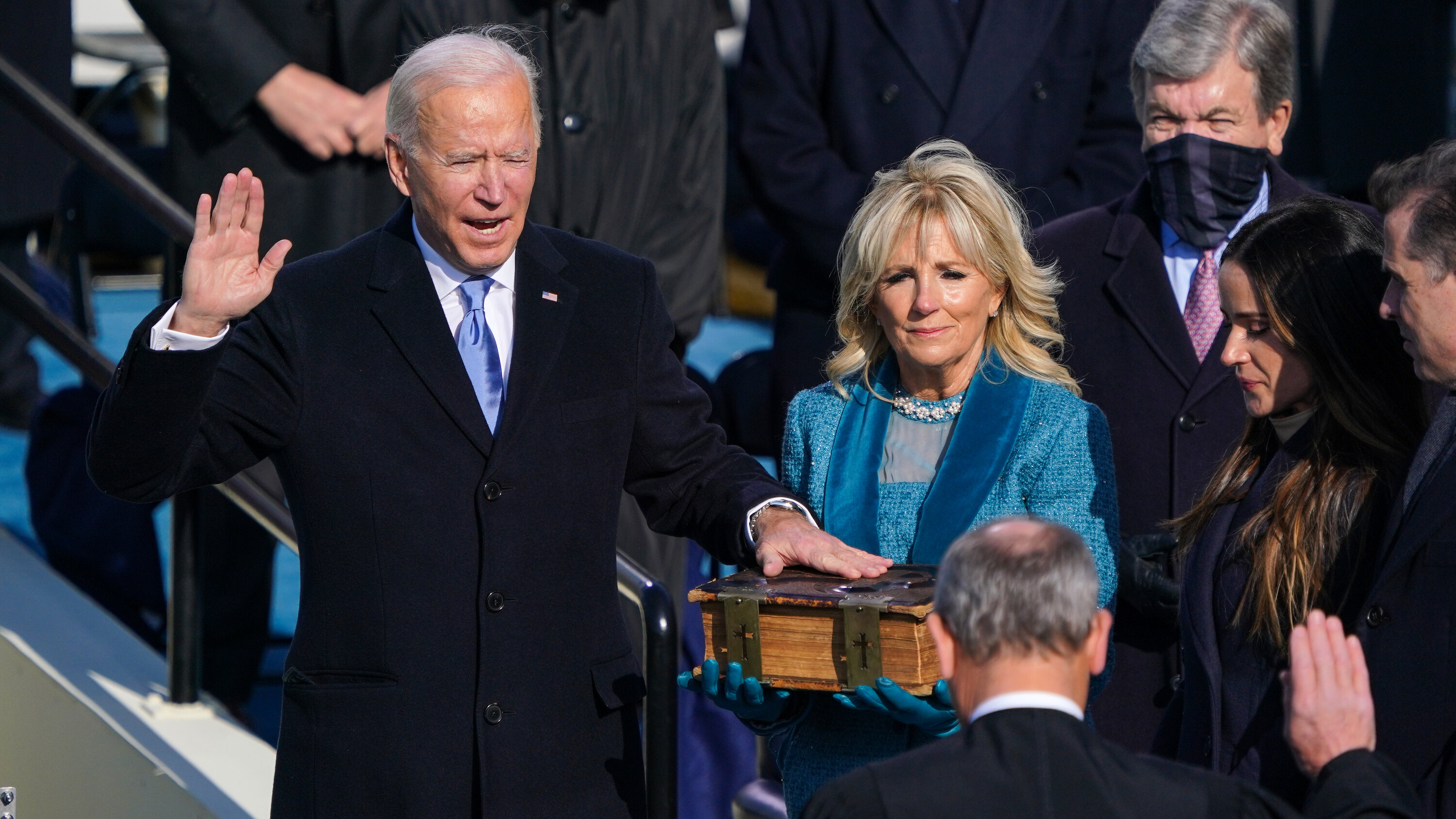 The Inauguration Kept Crowds Out and Tried to Bring America In