If you purchase an independently reviewed product or service through a link on our website, we may receive an affiliate commission.

Ben Higgins is set to marry esthetician Jessica Clarke in her hometown of Nashville in November of 2021 “no matter what,” he insisted on a live episode of HollywoodLife TVTalk via Instagram on April 5. With the nuptials happening in just seven months, Ben already has a good idea of who’s going to be on the guest list. The Season 20 lead of The Bachelor shared which of his “true” friends and “special people” from Bachelor Nation will be on that list!

“People from Bachelor Nation, there’s going to be a lot. It’s going to be true as far as friends are,” Ben EXCLUSIVELY told HollywoodLife, before giving names: “You’ve got Ashley Iaconetti who’s my co-host on the podcast [The Ben and Ashley I Almost Famous]. Becca Kufrin who was my co-host for The Bachelor live tour. You also have Dean [Michael Unglert] and Jared [Haibon] and Nick Viall and Wells [Adams] and Tanner [Tolbert]. There’s all guys from my season and guys that came afterwards. Shawn Booth. To this day, I say one of my favorite people in the world is Becca Tilley. She’s going to be there. She’s been incredible to my fiancée as Jess has sort of walked this world with The Bachelor and had to hear about it. Just some special people like that.”

The groom-to-be wants to include his co-horts from the Bachelor Nation in more wedding activities than just the nuptials, though. “I have my bachelor party coming up and I have about 10 friends from The Bachelor world that are real friends of mine,” he also shared. “People that have been a part of my life, been there through the ups and downs. I hope we can get together and celebrate. I dreamed of a good bachelor party. I hope we can get together and meet up soon once it’s safe.” 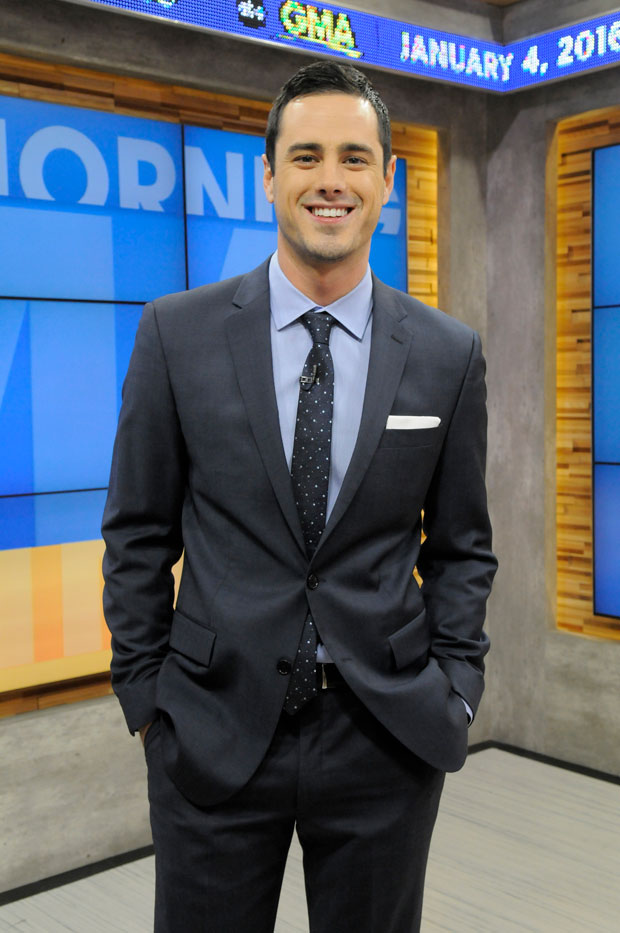 “We have three pastors in our life that have meant a lot to us: my childhood pastor, Jessica’s family’s best friend’s a pastor who’s meant a lot to us, and then my pastor as I first moved who’s a great buddy of mine,” Ben told HollywoodLife in regards to who’s officiating the wedding. He added, “They’re going to kind of be sharing the responsibilities and that’s something that we’re excited about. We wanted them all involved in their own unique way.” [ABC]With such a big projected turnout from the Bachelor Nation, we of course had to ask if Ben and Jessica were open to having their wedding ceremony filmed. “Well here’s the truth. People might thing that being the ‘Bachelor’ makes you a ton of money,” Ben said, referring to his season of the ABC dating competition show that aired in 2016. While The Bachelor made Ben a household name, he said that presuming that he is rich because of the show is a “false assumption” and that “you have to work afterwards to do some stuff.” So, in regards to potentially filming his wedding, Ben said “it would have to be the right deal.” He added, “I don’t think we’re going to have it filmed. We are going to have it covered. There’s going to be pictures shared. I also think it’s a moment to allow this to be our special day with our friends and family. “While Ben hopes that all his “friends and family” — both from the Bachelor Nation and outside of it — can make the ceremony, he’s prepared to say “I do” to Jessica no matter who’s in the pews. “No matter what, we’re getting November of this year, with people, without people, whether it’s just the two of us,” Ben said, alluding to the fact that the ongoing COVID-19 pandemic is constantly changing everyone’s plans (Ben’s own wedding included, which was initially meant to take place in 2020). He emphasized, “Whatever it is, we will be married by November of this year.”

Before Ben proposed to Jessica in March of 2020, he was once engaged to Lauren Bushnell, who won his season of The Bachelor in 2016. They ultimately parted ways in May of 2017, and Ben dedicated a chapter to his ex-fiancée in his memoir Alone in Plain Sight: Searching for Connection When You’re Seen but Not Known that came out on February 2, 2021. As for how Lauren felt about Ben writing about their relationship so publicly, the ABC star said, “There’s stories that you hear where people share the gossip about people without asking them. In a sense I felt like, ‘Hey, Lauren’s married. She has a kid on the way. I’m engaged. Life’s moved on. There’s no hard feelings there it just didn’t workout. I respect her enough and I think she respects me enough where I was like, I feel like if I’m going to write this and put it out there, it’s only fair to get [Jessica’s] approval first. It would feel weird without asking. That would just be disrespectful not to and she was nothing but supportive of it.”

And as for how Jessica felt about this chapter, Ben told us, “With my fiancée, she’s been incredible the whole time. She knows it’s a part of my story and she’s going to love me for my whole story, the good, the bad, the ups and the downs, the things that did workout and the things that didn’t workout. When I asked her if she minded if I reached out to Lauren she said, ‘No, I don’t mind at all. I think it’s the right thing to do.’ I had her approval and Lauren was so nice. Just the text back was like, ‘Hey, this is a part of your story and this is a book about your story so you should share it.’ She was just incredible about it so I have nothing but a ton of appreciation for just how she responded.”

Ben also weighed in on his thoughts in regards to the controversy that played out at the end of Matt James‘ season of The Bachelor, which aired its finale on March 15. Here are Ben’s thoughts:

HollywoodLife: Matt’s season ended in a way the show had never seen before. What did you think of that and have you spoken to him at all?

Ben: I’ve spoken to him off and on. Matt’s an incredible dude and I respect him a ton. I think he had a lot on his plate this year with multiple different things. Not even never experiencing the show, also being the first Black lead that’s a Bachelor. I think with that, even the controversy within the house. Those things are heavy with a guy who didn’t know what he was walking into right away. I talked to him before the show first started and the one thing I told him was, ‘Hey, if this isn’t right for you don’t propose because the proposal’s a big deal and I know that now. I’m engaged and I’m happily engaged and if it’s not right for you then don’t do it,’ and he didn’t. I’m not going to say I talked him into that because I don’t want to say he listened to me that much, but I’m supportive of it because we got to see the story and it didn’t work. But I guarantee you Matt James is going to go on and do incredible things even after the show.

HollywoodLife: How is he doing?

Ben: I think he’s fine. I think it’s been up and down. For anyone who’s been on the show, it’s a unique experience. I think it’s really hard. Matt’s a strong dude. He’s going to be incredible if not now, soon.

HollywoodLife: What do you think about the direction the show is headed in and the changes that are happening and what still needs to be done?

Ben: If you look at the first 22 Bachelors, you have very little diversity. I think that’s the one thing we need to see. We want to see. I think viewers are calling for it. I think that’s a big first step. I think the second thing is casting people that are there for the right reasons to at least try to find love and trying to make this work. I’ll be honest. As a fan of the show now, I love true love stories and I actually enjoy — maybe this is the evil side of me — seeing people cry based on pursuing love and it not working. I want to get into the depths of these people. I want to get in the grip of these people. I want to see people pull their hearts out and try to pursue this relationship. Along the way you’re going to see ups and downs, but I think we need to cast people, too.